“The Zofnass Program for Sustainable Infrastructure has completed its mandate to create a sustainable infrastructure rating system and produce research that was directly supportive of Envision,” said Harvard Emeritus Professor Spiro Pollalis, the driving force in the program since 2007. “ISI is the natural home for the Zofnass Program following an evolution that saw the research shift to an industry focus with the potential to provide even more value to the sustainable infrastructure community.”

“The Zofnass Program was instrumental in developing Envision and then supporting its growth through a strong applied research program, so it was always very important to ISI that we keep the name of the program’s namesake and benefactor, Paul Zofnass,” said ISI’s president and CEO Anthony Kane. “It’s amazing how Envision serves so well the original purpose, and that’s due to the first three years of very intense work, and in all honesty, that opportunity wouldn’t have come to pass without Paul.”

Honoring the Legacy of Paul Zofnass

Today, with more than 130 Envision-verified infrastructure projects and more than 6,000 Envision Sustainability Professionals around the world, it is easy sometimes to forget the pre-Envision era.

In the 2000s, for example, there were other rating systems, but none were built specifically for infrastructure, and none were as versatile as Envision is today. Creating such a rating system was going to be a heavy lift. It required the combined knowledge, experience, and resources of the largest firms in the Architecture, Engineering, and Construction (A/E/C) industry. 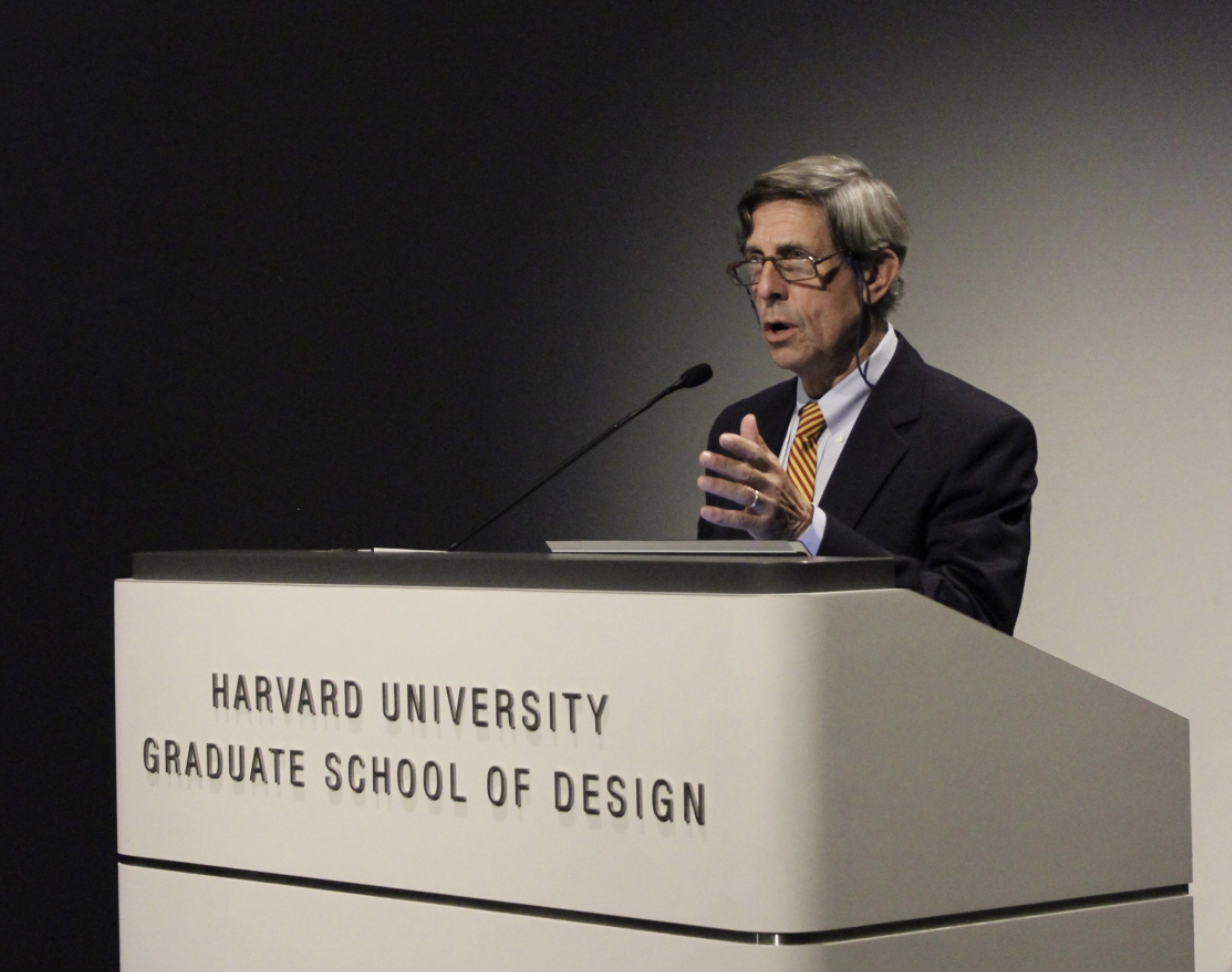 Zofnass opening the Planning Sustainable Cities Workshop at Harvard in November 2016. Long after the launch of Envision®, he remained a magnetic presence in the program named after him.

“I recognized that if anyone could appreciate and understand the subtlety and issues of sustainable design, it would be the engineering and design firms who were our clients,” Paul Zofnass wrote in the foreword to the 2013 book Infrastructure Sustainability and Design (edited by Pollalis and colleagues), as he looked back on the mid-2000s.

In that decade, the Environmental Financial Consulting Group (EFCG), the firm Paul Zofnass founded in 1990 after 17 years in finance, had grown into one of the leading advisors to the industry. EFCG’s work included helping firms navigate the industry’s first big wave of M&A activity in the 21st century. For this group, Paul was an influential and well-respected figure.

Industry champion
He was also a winsome and magnetic presence, drawing senior leaders from industry and government to EFCG’s annual summits. A long-time environmentalist, he would ask them at these conferences and on client calls, Was there not a universally-agreed framework to measure sustainability in infrastructure?

No, there wasn’t. Paul thought: Was that not the crux of the issue right there — that you couldn’t manage what you couldn’t measure? Even more than that, lacking the ability to compare one project to another with a usable rating system, his clients were missing what could be an influential tool to improve their environmental performance and bottom lines. “How can we help the engineering firms do better and do good at the same time? That was Paul’s single-minded focus with sustainability and infrastructure,” Joan Zofnass recalled of her older brother’s vision.

In 2007, the Zofnass family decided to approach Harvard, proposing the idea of developing a rating system. Dr. Spiro Pollalis, who was recommended by a colleague at EFCG, became the initiative’s key partner within the Graduate School of Design. Paul’s financial contributions and encouragement seeded the new initiative tasked with developing a sustainability rating system for infrastructure. It would benefit, most importantly, from the resources and expertise of the A/E/C firms that were Paul’s clients.

A risk worth taking
“People didn’t really know what sustainability was, let alone share a common technical language to talk about it, but they knew Paul,” recalled Anthony Kane. “It was hugely important that here was a well-respected and influential individual, telling his clients that this is what they needed to be focusing on.”

Left: Paul at the February 2015 Water Infrastructure Conference at Harvard; Right: With Bill Bertera (middle), ISI’s first CEO, and Tim Psomas (former CEO of Psomas Engineering), an initial board member and early champion of ISI, in 2012.

Paul concluded that if he could get them to join this initiative, it could fly, recalled ISI board member Marty Janowitz, a former VP at Stantec who became an early and longstanding supporter of the Zofnass Program. “Paul personally called up the firms and got their CEOs on the phone. Nearly all of them said yes, almost without hesitation.”

Getting that support from company leaders ensured the program could fuse leading research insights. The promising start also made it possible to benefit from the best of other rating system initiatives, like the one being developed by the American Society of Civil Engineers (ASCE). In 2010 ASCE, the American Public Works Association (APWA), and the American Council of Engineering Companies created ISI and by 2011 ISI and the Zofnass Program had entered into a strategic collaboration. Working together, they were able to integrate the best of industry experience with cutting-edge academic research to deliver Envision in 2012.

A promising foundation
But in 2007, none of that was even remotely on the horizon. So it is incredible now to think that at Harvard for the initial meetings, seated around the table to discuss the concept of the rating system, were 25-30 of the most prominent engineering, design, and architectural companies in the industry, together with public agencies and academics. The draw for them was the opportunity to be involved in creating it, developing it, and ensuring that it would be usable and understandable to their clients.

On an individual-professional level, what took place were incredible, fascinating discussions about how it could work, philosophically and technically, participants recall. Gathering in Cambridge, MA, there were sub-meetings for geotechnical, water, and every conceivable discipline. The firms flew their experts in. It was all pre-Zoom. 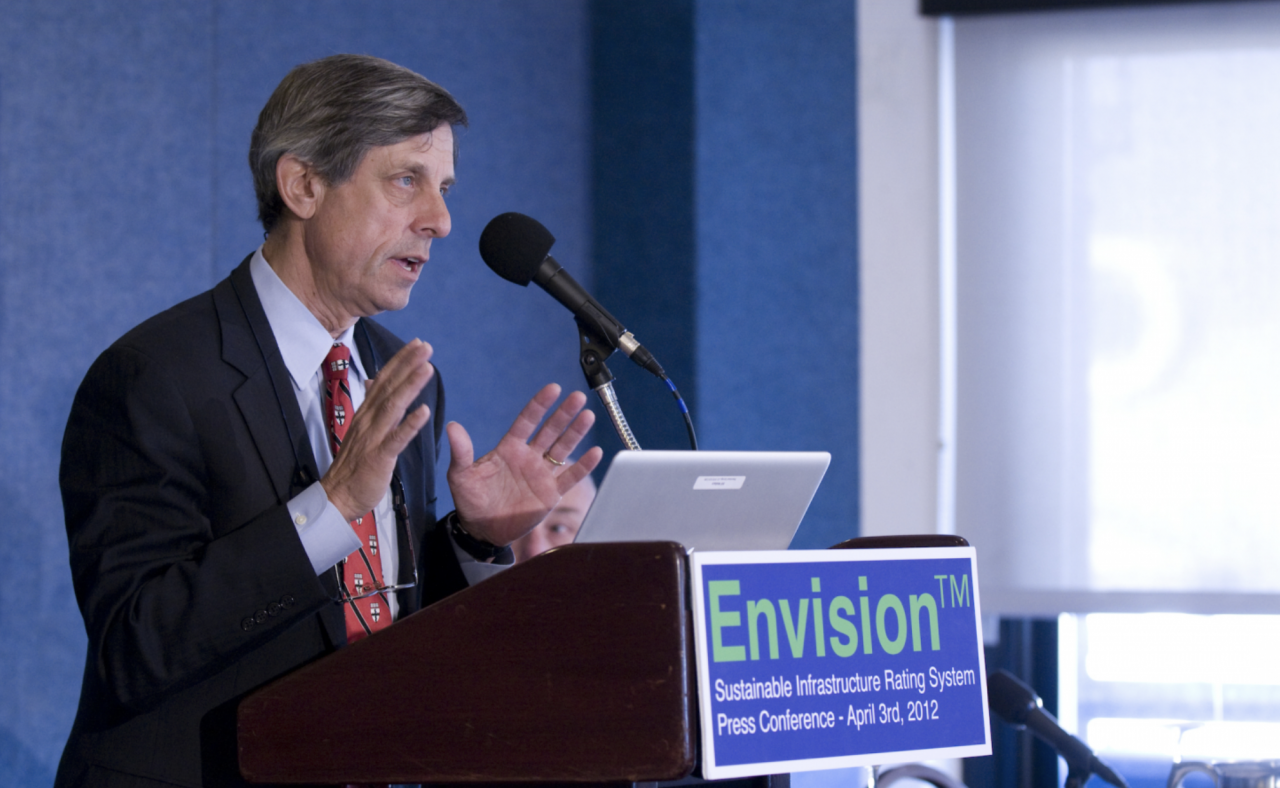 At the April 2012 Envision launch event.

Paul remained very engaged, always opening major events or announcements, and that dedication to the Zofnass Program for Sustainable Infrastructure continued long after the launch of Envision. “Sometimes he and Joan were coming that morning from New York, and we were not starting before they would arrive,” recalled Prof. Pollalis. “They were at every event — they did not miss one.”

As the rating system initiative progressed and requests went out for financial support to continue the work, once again, Paul Zofnass and his new endeavor at Harvard would almost always receive a “yes.” The opportunity to develop the rating system was too big to let go of.

Single-minded vision
After the early concept meetings, what followed was a very intensive period to create the Envision of today, with its ability to capture and align the total value of infrastructure with the credits and points in the framework across various infrastructure characteristics.

Looking back, it was an exceptional feat — combining the required talent and experience in one place to pull it off. One might call it a remarkable confluence, not to say miraculous. But to put it that way might lead you to overlook the convening power, the magnetism, the tenacity, and clarity of vision of someone who succeeded in getting the industry, against considerable odds, to rally around the idea of a single sustainability rating system for infrastructure: Paul Zofnass.­­